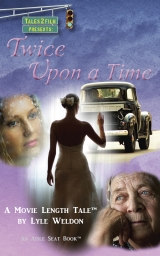 An unhappy elderly woman on the verge of death is given the opportunity to go back to when she was twenty years old and live her life over again. Is she destined to make the same choices or will she wind up happier than her first time through?

“For anyone who has wondered ‘what if…’, this story is a must read. It follows a woman back in time who questions her life choices – will she make the same choices again? Very thoughtfully considered tale of what could have been. Excellent character development. Compelling story. Wonderfully written. I highly recommend this “movie length tale”.

Lyle Weldon was inspired to spend a career telling stories on film while sitting in a movie theater watching Steven Spielberg’s “Close Encounters of the Third Kind.” A chance meeting with Mr. Spielberg while Lyle was a film student at California State University, Northridge lead to this sage piece of advice from the filmmaker: “Learn how to write a movie before you film it. Until you can tell a story really well on paper, save your money.  Film will wait.” Taking that to the extreme, Lyle has since written for multiple Emmy-winning primetime television series as well as both live action and animated children’s series.  But it’s the silver screen which continues to inspire Lyle’s deepest dreams.  While several of his screenplays have been optioned and he’s been hired to rewrite others, he still looks forward to seeing one of his own films in a movie theater.  He’s excited to join the talented crew at Aisle Seat Books and welcomes the opportunity to share his stories with avid readers before film audiences have the chance.  He lives in Los Angeles with his beautiful wife and their two equally-lovely daughters.