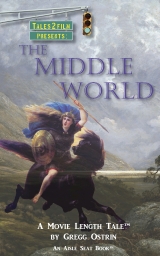 While still young professors at Oxford, J.R.R. Tolkien and C.S. Lewis discover a portal to a mythological world and journey on an adventure that will inspire their masterpieces of fantasy.

A native of Los Angeles, Gregg Ostrin has written and sold screenplays, TV pilots and has even had a couple plays produced, most recently “Kowalski” which premiered in Los Angeles in the summer of 2011. He has also written on the television series “Wind on Water” starring Bo Derek, on “Xena, Warrior Princess,” as well as on the landmark internet series “Whirl Girl” and “Second City Naked News.” In addition, Gregg has written the copy for the trailers of some of the biggest movie campaigns in recent film history. He is thrilled to see his screenplay for “The Middle World” achieve new life in this exciting new incarnation.