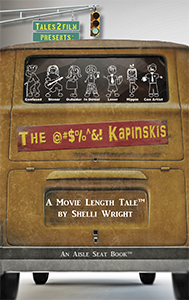 It’s true, you can’t choose your family. But you can choose to pretend they’re all dead… like Joe does until a canceled flight forces him to reunite with the dysfunctional family he’s kept secret from his very pregnant wife. Now all he wants is to get out of there as fast as he can and leave his past behind. But the past has other plans.

Shelli Wright spent 15 years as an ad copywriter and creative director coming up with tantalizing campaigns for brands as glamorous as Poise undergarments. She moved to LA in 2009 when the call of screenwriting became too loud to ignore and now pays her bills with the lucrative awards from various screenwriting competitions. On a serious note, Shelli created and produced a talk show for PBS and has written on assignment for several theatrical projects including the US Air Force (no, that’s not a joke). She lives in LA with her two children and their black long haired dachshund, Ozzy Osbourne, Pup of Barkness.