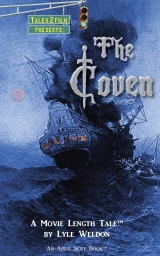 When a young man and his peaceful community of people with magical powers escape from the Salem witch trials on a ship, he learns that some of his group are guilty of practicing the dark arts.  When these evil people break off and become the most blood-thirsty pirates on the open seas—and take his beloved with them—he must set off to rescue his love and defeat his former comrades.

Action and Adventure, Fantasy • 13 and older

“…reads like one of those really good swashbuckling adventure stories full of sea battles, honor among men (and women) and faith in family – even if they are ‘witches’. A great story from a great story teller for people of all ages. I highly recommend it and hope there’s a sequel in the works.”

Lyle Weldon was inspired to spend a career telling stories on film while sitting in a movie theater watching Steven Spielberg’s “Close Encounters of the Third Kind.” A chance meeting with Mr. Spielberg while Lyle was a film student at California State University, Northridge lead to this sage piece of advice from the filmmaker: “Learn how to write a movie before you film it. Until you can tell a story really well on paper, save your money.  Film will wait.” Taking that to the extreme, Lyle has since written for multiple Emmy-winning primetime television series as well as both live action and animated children’s series.  But it’s the silver screen which continues to inspire Lyle’s deepest dreams.  While several of his screenplays have been optioned and he’s been hired to rewrite others, he still looks forward to seeing one of his own films in a movie theater.  He’s excited to join the talented crew at Aisle Seat Books and welcomes the opportunity to share his stories with avid readers before film audiences have the chance.  He lives in Los Angeles with his beautiful wife and their two equally-lovely daughters.