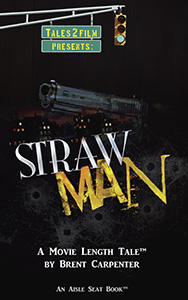 When a crew of gun-runners suspected in a notorious unsolved murder start dying one by one, a renegade ATF Special Agent fears that their crime’s only witness – a young survivor whom he’s trying to protect – may now be their killer.  As the heavily-armed combatants close in on each other, he has no choice but to step between them.

Thriller and Suspense • 17 and older

“Very well written, hope to see it as an actual movie! Can’t wait to see what happens next! Loved it!”

Born in Dundas, Ontario, Canada, Brent Carpenter is a writer whose favorite movies as a child were Jaws, Die Hard and Raising Arizona. He is most inspired by the Coen brothers, who manage humor amidst the drama and poignancy amidst the humor, and for whom even the most minor characters are given their moment to shine.
Brent was floating aimlessly through his post-graduate existence, writing two screenplays and two shorts, when he left his job and decided to focus on his newest script – Straw Man – for as long as his savings would last him. When he had difficulty getting the script into the hands of Hollywood agents, the first publisher he contacted was Ed Gray of Aisle Seat Books. Brent was encouraged by Ed to do a re-write, and was thrilled when he was given an offer to publish.
Brent believes that humanity is equal parts amazing and ridiculous, and he enjoys exploring how this concept permeates every aspect of the world, from the abject to the heroic. He has no preference between comedy or drama – just that each has a bit of the other, and that every one entertains.