Double Feature – The Sleep of Reason and Hiding Billy 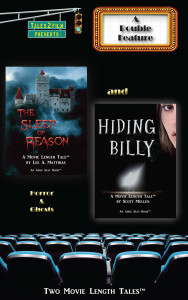 The Sleep of Reason & Hiding Billy: A Tales2Film™ Double Feature

by Lee A. Matthias and Scott Mullen

Two Movie Length Tales™ from Aisle Seat Books™.
The Sleep of Reason: A riveting prequel to the Dracula story. After his bride disappears on their European honeymoon, a man traces her to a castle ruin in the Carpathian mountains, and confronts its undead inhabitants, determined to restore her to life and bring her home. An apocalyptic war of Good versus Evil.
Hiding Billy: A woman tries to protect the ghost of a little boy from the angry spirit of his undead father.