Double Feature – The @#$%^&! Kapinskis and The Ballad of Ethan Burns 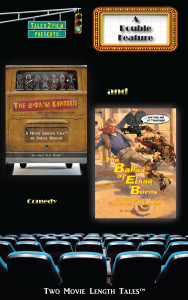 The  @#$%^&! Kapinskis & The Ballad of Ethan Burns: A Tales2Film™ Double Feature

Two Movie Length Tales™ from Aisle Seat Books™.
The @#$%^&! Kapinskis: It’s true, you can’t choose your family. But you can choose to pretend they’re all dead… like Joe does until a canceled flight forces him to reunite with the dysfunctional family he’s kept secret from his very pregnant wife. Now all he wants is to get out of there as fast as he can and leave his past behind. But the past has other plans.
The Ballad of Ethan Burns: The stymied son of a Western movie icon risks Hollywood’s ridicule when he assembles an unlikely crew to produce and star in an epic horse opera of his own. As he trips over his father’s long shadow, a beautiful director who ties his tongue, two feuding Native American tribes–and nine very angry mailmen–Ethan Burns finally learns that he might not be his own worst enemy. Now, with everything on the line, he must find out who is.