Double Feature – The Coven and Twice Upon a Time 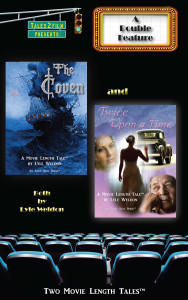 The Coven & Twice Upon a Time: A Tales2Film™ Double Feature

both by Lyle Weldon

Two Movie Length Tales™ from Aisle Seat Books™.
The Coven: When a young man and his peaceful community of people with magical powers escape from the Salem witch trials on a ship, he learns that some of his group are guilty of practicing the dark arts.  When these evil people break off and become the most blood-thirsty pirates on the open seas—and take his beloved with them—he must set off to rescue his love and defeat his former comrades.
Twice Upon a Time: An unhappy elderly woman on the verge of death is given the opportunity to go back to when she was twenty years old and live her life over again. Is she destined to make the same choices or will she wind up happier than her first time through?