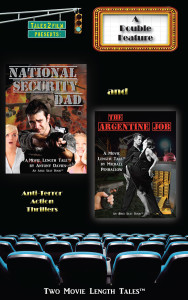 by Antony Davies and Michael Penhallow

Two Movie Length Tales™ from Aisle Seat Books™.
National Security Dad: When a highly-dedicated CIA operative returns to suburbia to raise his two daughters, an old enemy and a small army of fanatics follows him, forcing him to fight for his family while protecting the new life he is trying to build.
The Argentine Job: When a former Delta Force soldier reluctantly agrees to take on one last job for the CIA, he should have known that stealing from al Qaeda wouldn’t be easy.