Double Feature – I’m With the Band? and Sarah’s Game 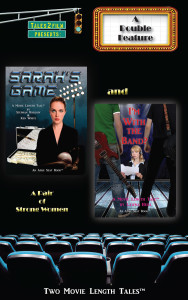 I’m With the Band? & Sarah’s Game: A Tales2Film™ Double Feature

Two Movie Length Tales™ from Aisle Seat Books™.
I’m With the Band?: A fast-rising young publicist with a preference for alternative music that she shares with her serious musician boyfriend gets sent on a world tour with the hottest boy band on the planet. What could go wrong?
Sarah’s Game: A hardball TV sports reporter learns the gambling scandal that drove her potential Hall of Fame father from major league baseball was a setup. Teaming with an idealistic sportscaster—her father’s former teammate and her girlhood heartthrob—she sets out to clear her father’s name.