Double Feature – Foe and The Sleep of Reason 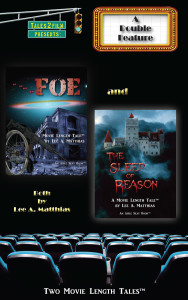 Foe & The Sleep of Reason: A Tales2Film™ Double Feature

both by Lee A Matthias

Two Movie Length Tales™ from Aisle Seat Books™.
Foe: In a near-future world shattered by an alien invasion, a lone Special Forces soldier stumbles on a group of disabled military vets holding their abandoned VA hospital as the invaders lay siege.
The Sleep of Reason: A riveting prequel to the Dracula story. After his bride disappears on their European honeymoon, a man traces her to a castle ruin in the Carpathian mountains, and confronts its undead inhabitants, determined to restore her to life and bring her home. An apocalyptic war of Good versus Evil.