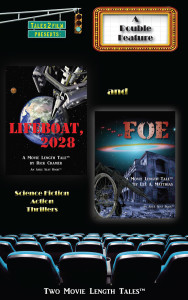 by Lee A. Matthias and Rick Cramer

Two Movie Length Tales™ from Aisle Seat Books™.
Foe: In a near-future world shattered by an alien invasion, a lone Special Forces soldier stumbles on a group of disabled military vets holding their abandoned VA hospital as the invaders lay siege.
Lifeboat, 2028: After a nuclear war destroys the Earth, seven passengers trapped in the world’s first space elevator must put aside personal and cultural differences to try to reach a fledgling colony on Mars.