Double Feature – Eiko and The Coven 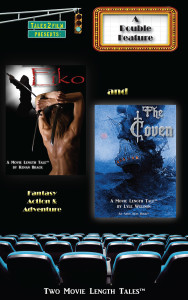 by Kenan Brack and Lyle Weldon

Two Movie Length Tales™ from Aisle Seat Books™.
Eiko: A young girl is raised and trained by the assassins who killed her family. When she comes of age, she becomes their next target. And they become hers.
The Coven: When a young man and his peaceful community of people with magical powers escape from the Salem witch trials on a ship, he learns that some of his group are guilty of practicing the dark arts.  When these evil people break off and become the most blood-thirsty pirates on the open seas—and take his beloved with them—he must set off to rescue his love and defeat his former comrades.