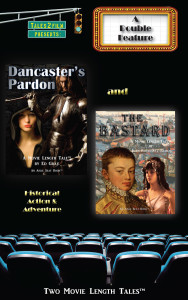 by Ed Gray and Juan Rodriguez-Briso

Two Movie Length Tales™ from Aisle Seat Books™.
Dancaster’s Pardon: Captured and forced into labor in a French castle, an English archer with a checkered past escapes when his French lover shows him a weakness in the castle wall. She gets caught in the process, and now he and his renegade mates must retake the castle to save her.
The Bastard: The illegitimate brother of the Spanish king spends his life in an epic quest for acceptance, fighting great battles abroad and struggling against his resentful half brother at home, until, with his goal almost in reach, he is at last forced to choose between love and glory.