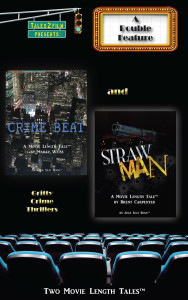 by Marty Weiss and Brent Carpenter

Two Movie Length Tales™ from Aisle Seat Books™.
Crime Beat: A New York crime reporter, the son of a former Police Commissioner, pursues a serial killer until he has to choose between identifying the killer and unmasking a secret his father meant to take to his grave.
Straw Man: When a crew of gun-runners suspected in a notorious unsolved murder start dying one by one, a renegade ATF Special Agent fears that their crime’s only witness – a young survivor whom he’s trying to protect – may now be their killer.  As the heavily-armed combatants close in on each other, he has no choice but to step between them.