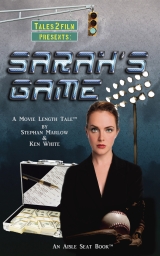 A hardball TV sports reporter learns the gambling scandal that drove her potential Hall of Fame father from major league baseball was a setup. Teaming with an idealistic sportscaster—her father’s former teammate and her girlhood heartthrob—she sets out to clear her father’s name.

Thriller and Suspense • 13 and older

“It was interesting to read a screenplay since I never had before. I enjoyed the story line and the style was actually quite entertaining.”

Stephan Marlow was born in Washington, DC, and grew up shuttling between the DC area and various locations in California. He has a degree in Russian language and literature from UC Davis and has worked in a variety of occupations, ranging from arts administration and financial planning to big-rig truck driver. He is the author of several screenplays and children’s stories and a recently completed first novel, The Aeolian Harp, book one of a serio-comic romance trilogy. He currently resides in Denver, Colorado, with his beloved black Lab, Buddy.

Ken White is a writer and media consultant. He has designed, written, and managed a variety of informational, promotional, and entertainment media for companies worldwide. Ken received his AA at Modesto Junior College, his BA and Teaching Credential at UC Davis, and his MA at San Francisco State University. He has taught mass communications and film appreciation. He is the author of two novels, fourteen screenplays, one sitcom pilot, and one stage play. Born in Lathrop and raised in Modesto, California, Ken enjoys writing about the Central Valley heartland.