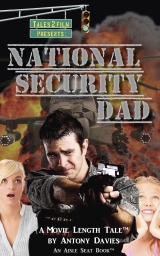 When a highly-dedicated CIA operative returns to suburbia to raise his two daughters, an old enemy and a small army of fanatics follows him, forcing him to fight for his family while protecting the new life he is trying to build.

Action and Adventure • 13 and older

Antony Davies was inspired to write in his early teens by the novels of Stephen King and films ranging from “Jaws” and “Star Wars” to the John Hughes back-catalogue, and – in his later teens – the likes of “Lethal Weapon” and “Die Hard.” “These are all films I still hark back to when I need inspiration,” he says, “although people like Duncan Jones, Christopher Nolan and Joss Whedon are modern filmmakers who have given me a lot of inspiration lately.” Antony’s first successes came with short fiction, placing in many competitions and publishing a number of stories online and in print. After a few years of promotions in a largely unfulfilling job, Antony went part time and completed a degree in creative writing, where he says he “Discovered that screenwriting was where my heart really lay.” Since then, Antony has gone on to many contest placings, including the Nichol’s second round, the top 5% of the UK’s most prestigious TV scriptwriting contest, and to the semifinals and finals of Amazon Studios with no fewer than four screenplays. He says, “I feel I am so close to seeing my work produced, and Aisle Seat Books may well give me the push I need.” Antony lives in Staffordshire in the United Kingdom with his wife and two children, and currently works for the BBC.