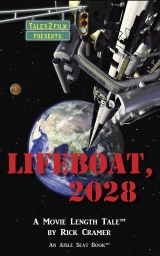 After a nuclear war destroys the Earth, seven passengers trapped in the world’s first space elevator must put aside personal and cultural differences to try to reach a fledgling colony on Mars.

“…Lifeboat 2028 is both innovative and superb. [Rick Cramer] brings a fresh perspective to the complexity of merging the human element along with the constrictive confines of a new space age. His mechanical knowledge is overwhelming and highly intelligible. He links and juxtaposes military and civilians from multi-cultures in both highly tense and absorbing ways. Cramer has certainly created an exciting prospect for the movie screen. Bravo!”

Born at the right time to live through the glory days of NASA, Rick Cramer has always been a science and science fiction fanatic. From an early age, the writings of authors such as Isaac Asimov, Arthur C. Clarke and Carl Sagan made a lasting impression. Films such as “2001, A Space Odyssey,” “Aliens” and “Blade Runner” inspired Cramer to embark on a writing career of his own. A US Air Force veteran, Cramer currently resides in Los Angeles.