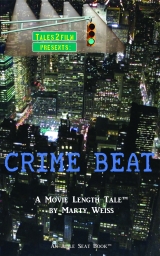 A New York crime reporter, the son of a former Police Commissioner, pursues a serial killer until he has to choose between identifying the killer and unmasking a secret his father meant to take to his grave.

Drama, Thriller and Suspense • 17 and older

“This story should be serialized! Roman Scarpelli is a great crime solving character, in the vein of a Jonathan Kellerman sleuth or the film noir private eyes. A lightning fast page turner that thrilled and excited by giving a great sense of New York City and how crimes are really solved.”

Marty Weiss became known for creating comedic and highly visual commercials, directing hundreds of national and international image campaigns for major Blue Chip brands and TV Networks before segueing into feature films and TV movies.
He has filmed throughout North and South America, Eastern and Western Europe, and Southeast Asia, and has garnered numerous festival and industry accolades. His screenplay, “The Alchemist Agenda,” was the first project honored with a Best Screenplay award from Amazon Studios and is currently on their active development slate for production.
Weiss earned his M.F.A. in film and television from New York University’s Tisch School of the Arts and a B.S. in Journalism from the University of Illinois, Champaign-Urbana.
He lives in Los Angeles with his wife Elisabeth, daughter Jasmine, and son Jake.