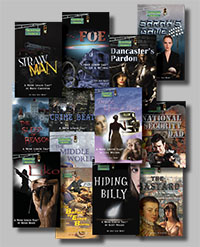 Every good movie starts with a script, and every good script tells a riveting story. Long before the actors are chosen and the filming starts, a writer sits down, crafts that story, and submits it for consideration by the producers, directors, and other creative talents in the film industry. It can take a long time. A script may spend years making the rounds before getting the elusive Hollywood “green light.” If it ever does. Some of the greatest movies ever written are ones that none of us will ever see on the screen.

Aisle Seat Books finds the best of those not-yet-produced tales and brings them to you just as the writer envisaged them. Each of the books in this series has been converted by the script’s author from the arcane shorthand of screenplay format into the familiar prose format you see here, a process called “novelization.”

These little books are not novels, or even novellas. Think of them as written movies. Like the screenplays they come from, each is presented in real time, written in the present tense to allow you to “see” the movie’s scenes in your mind’s eye as if they were unfolding on a theater’s screen before you.